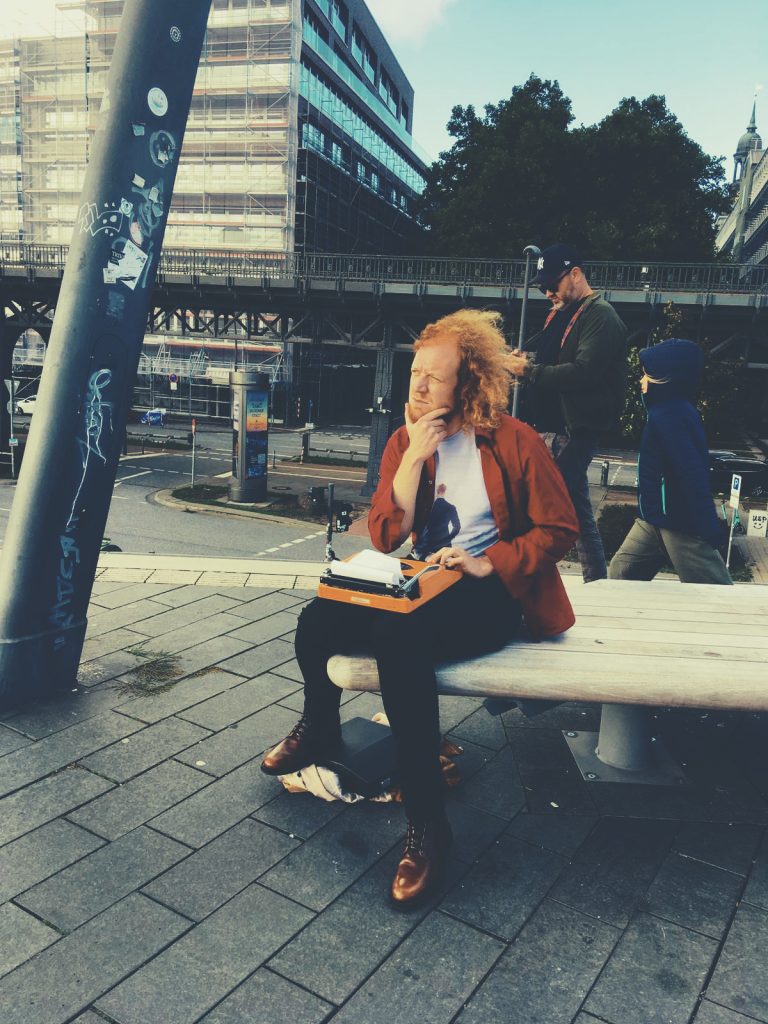 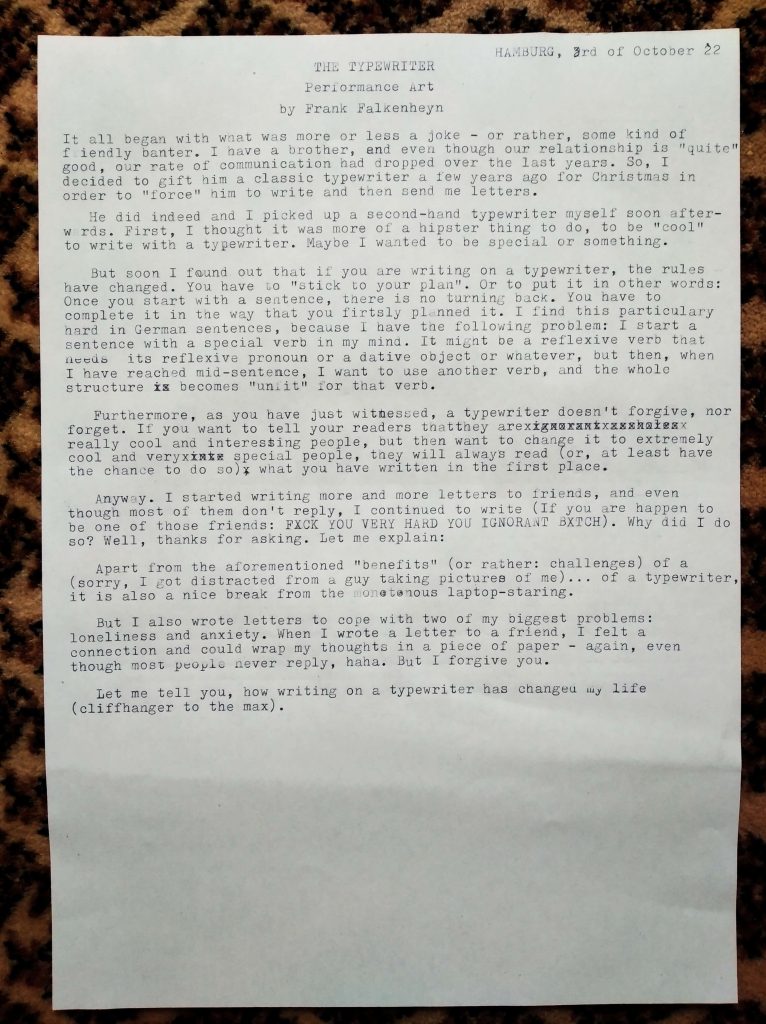 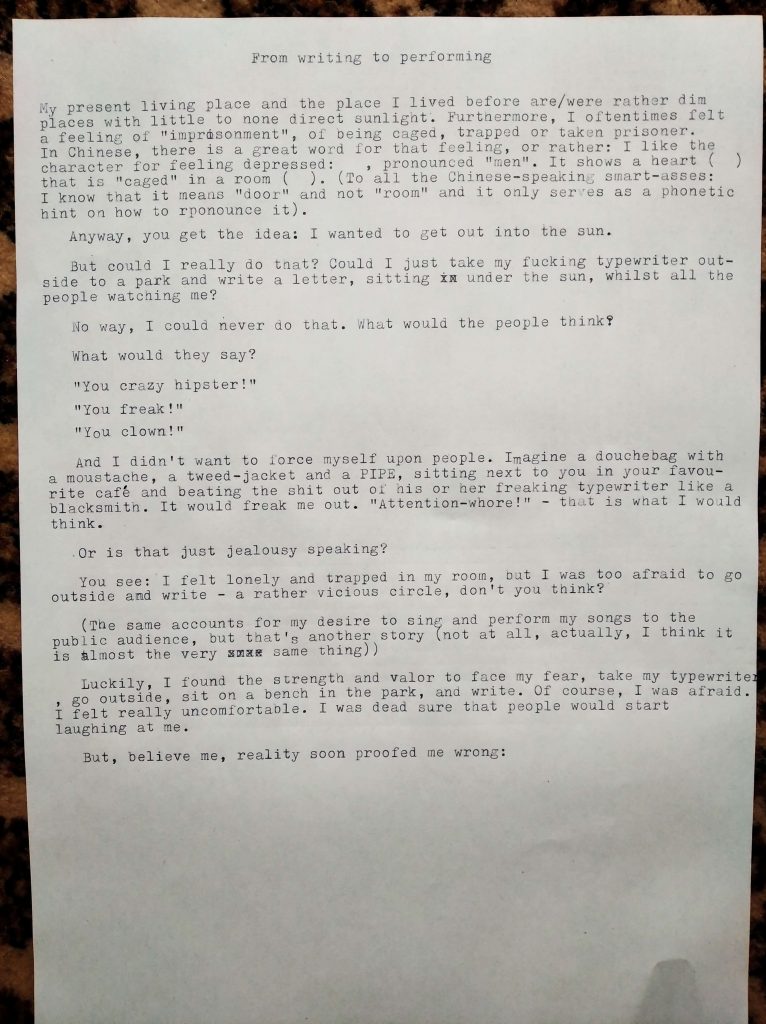 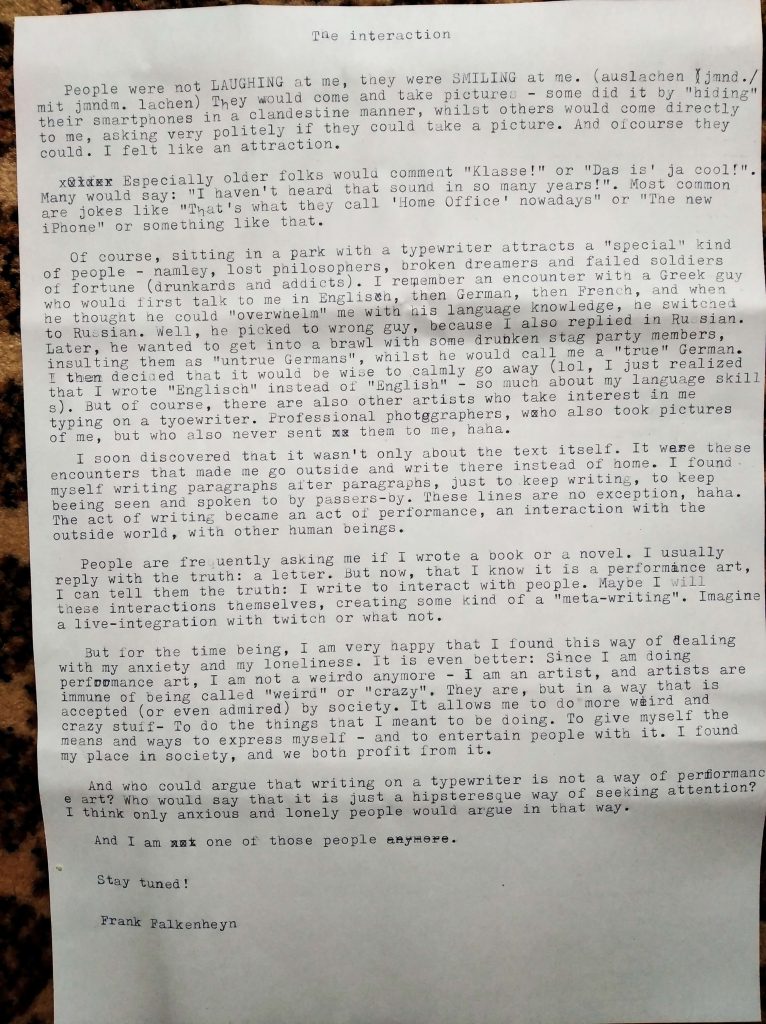 It all began with what was more or less a joke – or better, some kind of banter. I have a brother, and even though we have “quite” a good relationship, the rate of communication had dropped over the last years. So, I gifted him a classic typewriter a few years ago in order to “force” him to send me letters.

He indeed did and I picked up a second-hand typewriter myself. I thought it was more of a hipster thing to do in the first place, I wanted to be “unique” or special or something.

But I soon found out that if you are writing with a typewriter, you have to stick to your plan. Or to put it in other words: Once you start a sentence, you have to complete it as “planned”. I found this particularly hard with German sentences, because I have a tendency to have a rough idea in my mind when starting a sentence, but then suddenly getting a desire to change the verb when I reach mid-sentence, what often leads to the problem that you already have put reflexive pronouns or other shit and now are forced to write the sentence as you intended.

Furthermore, a typewriter doesn’t forgive, and if you want to call your readers assho… annoying people, but then want to change it to “Happy and intelligent human beings”, they will always see your “true intention”.

Anyway. I started writing letters to friends, and even though most of them didn’t reply (if you are one of them: Fuck you from the very bottom of my heart), I continued writing on a typewriter.

Apart from the aforementioned “benefits” regarding the way of writing, it is also some kind of a break from monotonous laptop-staring.

But I also wrote letters to cope with two of my hardest problems: loneliness and anxiety. When I wrote to a friend, I felt a connection and could wrap my thoughts in a piece of paper.

From writing to performing

My present living place and the place before are/were rather dim places with lack of sunlight. Furthermore, I oftentimes felt a feeling of “imprisonment”, of being caged. The Chinese have a great word, or rather character for it: 悶 It is a heart that is „trapped“ inside of a “room” (even though the character for “room” rather means “door” and only serves as a pronunciation indicator).

So, I wanted to get out into the sun.

But could I do that? Could I just take my fucking typewriter outside and write a letter in the sun?

No way, I could not. What would the people say!

Imagine a douchebag with a moustache and a pipe sitting in a café next to you and hacking on his or her clampy typewriter like a blacksmith. It would freak me out.

Or is that just jealousy?

You see: I felt lonely and trapped in my room, but I was too afraid to go outside and write – a rather vicious circle, don’t you think?

(The same accounts for my desire to sing and perform, but that’s another story (not at all, it’s exactly the same actually))

Luckily, I found the strength and valour to take my typewriter outside, sit in the park, and write. Of course, I was afraid, and I felt rather uncomfortable. I was dead sure that people would laugh at me.

But soon, reality proved me wrong.

People were not laughing AT me, they were smiling at me. They would come and take pictures – some did it “clandestine”, whilst others directly came to me and asked me if they could take a picture. Especially older folks would comment: “Geil!” (awesome) or “That’s so cool!”. Most common are jokes about “Home office” or something like that.

Of course, sitting in a park with a typewriter attracts a “special” kind of people – namely, lost philosophers and broken dreamers (drunkards and addicts). But also other artists who took pictures – and never sent them to me (fuck you too, haha).

Soon I found out that it wasn’t only about the text, but about these encounters that I was looking for when I went outside to write. I wrote paragraphs and paragraphs without any content (like these? Haha, no), just to be sitting there, to be present, to be seen, to be interacted with. The act of writing became an act of performance, of interaction with passers-by.

What would be the next step? Writing the things that I encounter? Something like a “live writing”? Maybe.

For the time being, I am happy that I can declare my weird behavior as “performance art”. It is a win-win situation: I can do weird stuff and call it art, which makes me an artist, which allows me to do more weird stuff – which means, being individualistic – and still being “accepted” by society.

Because – who could argue with the fact that writing on a typewriter in a park is not performance art, but just a hipsteresque attempt to get the attention of the people? Only anxious and lonely people would argue in that way.

And I am one of those people .